The image above is a combination of symbols which represent the

restored whole of our special land.  The heraldic cross, red and white, is known as the Crossland Banner, a component of the Maryland state flag.  It was the device of Lord Baltimore's mother's family, awarded by the King of England for their stout defence of their land, and came to represent the independent people of our region who sided with the Confederacy during the American Civil War.

A symbol of the blue crab is emblematic of the peninsula as no other could be,  representing a proud native, with a self-reliant and prickly nature and also the heart of Mardelva, the beautiful and bountiful waters of the Chesapeake Bay. Some of the earliest efforts to colonize and develop the American continent were here, going back to the early 1600's.  Finally the 13 stars, circled as in the original American flag,  represent the united 13 counties of Maryland, Delaware and Virginia, ready to join together and comprise a reunited and reborn Mardelva.                                                        Display it with pride!

Products using the Mardelva Banner available soon from this website. 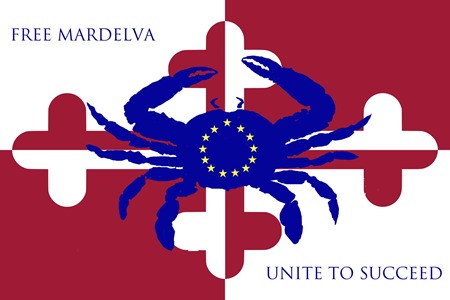